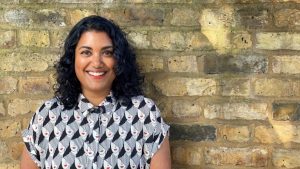 Mavahalli will join the London- and LA-based firm when it launches in the new year, working across teams in both the UK & US offices alongside Stephenson to develop British and American dramas.

She currently serves as creative director of in-house drama at Sky Studios and prior to that was director of drama at fellow ITV Studios label Mammoth Screen, where she developed and executive produced series including The Serpent, Noughts + Crosses and The City & The City.

Other credits include The War Of The Worlds, McDonald & Dodds, NW and Next of Kin. Before Mammoth Screen, Mavahalli worked at Film4 and Film London.

Stephenson’s new label was first announced in July, with the exec exiting his role as JJ Abrams’ Bad Robot, which he joined in 2015, and during which time was responsible for developing and executive producing shows including HBO’s LoveCraft Country, Apple TV+ drama Lisey’s Story, Castlerock at Hulu and UFO at Showtime.

Prior to Bad Robot, Stephenson spent nine years at the BBC, where he was controller of drama commissioning, overseeing 450 hours of shows a year, including Luther, Sherlock, The Fall, Line Of Duty, Happy Valley, Top of the Lake and Peaky Blinders.

Stephenson said: “When I decided to start my own company there was only one person I wanted by my side. I’m so grateful she agreed! Preethi is an exceptionally talented and lovely person with great taste and a fantastic track record. I cannot wait to get started, have fun and make some great drama with her.”

“To work alongside Ben, a producer I have admired for many years, is a dream of an opportunity,” added Mavahalli. “I am utterly delighted to be a part of this ambitious transatlantic venture and cannot wait to get started at Poison Pen Studios.”