Despite reports of Gen-Z’s progressive politics, it appears hyper-awareness around sexuality, consent, and toxic masculinity have only made high school popularity contests more sophisticated. That is, if we’re to take the outlandish feminist satire running through Netflix’s dark teen comedy “Do Revenge” at face value, anyway. If two-faced men’s rights groups and psychedelic mushroom stings seem a little ridiculous, it’s all part of the sickly fun and games of “Do Revenge,” a quippy romp through the steely cunning of that universally feared group: teenage girls.

Starring Camila Mendes (“Riverdale”) and Maya Hawke (“Stranger Things”) as two unlikely allies in a battle for teen justice, “Do Revenge” is a funny feminist take on the mainstream high school comedy. Touching lightly on class awareness and queer politics, the girls are firmly in control of this candy-coated world — though only one can come out on top. As their Machiavellian quest for revenge leads to some unlikely revelations, the self-righteous anti-heroines prove that boys aren’t the only toxic ones.

Mendes plays Drea, an it-girl on scholarship who falls from grace when her boyfriend “accidentally” leaks a sex tape. Convinced Max (Austin Abrams) is lying to save face, she assaults the golden boy in front of the whole school, instantly getting labeled as an abuser. Drea’s rich friends close ranks when they realize how much power Max wields (his father is a major political donor). “It was a classic Icarus story,” she says in her storybook voiceover. “I flew too close to the sun and my boyfriend leaked my sex tape.”

When the fabulous headmistress (played by timeless it-girl Sarah Michelle Gellar) puts her on behavioral probation, she’s forced to work at the tony private school’s organic garden. It’s there she meets wallflower Ellie (Hawke), a kooky transfer student with a hidden past. Driving Drea home in her vintage convertible, Ellie reveals a classmate is her childhood bully, who not only outed her at summer camp, but spread a rumor that Ellie forced a kiss on her.  Recognizing a kindred maligned spirit, Drea hatches a plan for them both to get even; they can avoid suspicion by “doing” each other’s revenge. 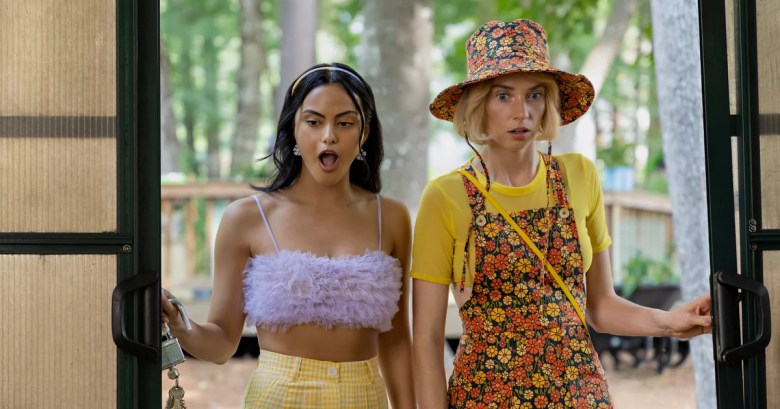 Soon, Drea is giving Ellie a “She’s All That” style makeover, styling her to the nines and offering tips on how to catch Max’s attention. “Your new vibe is high status cunt,” she instructs. “I’m Frankenstein, and you’re Frankenstein’s bad bitch.” The plan is to infiltrate Max’s friend group in order to humiliate them and prove once and for all that the founder of the “Cis Hetero Men Championing Women Identifying Students League” is full of shit. (One of the funnier asides is one of Max’s cronies cheering: “Let’s give it up for respecting women!”)

The script is full of pithy one-liners that keep the somewhat overstuffed action buoyant; it’s easy to forgive extraneous characters and loose ends when you’re being bombarded with clever quips. “Do Revenge” was directed by Jennifer Kaytin Robinson, who wrote the script with Celeste Ballard. The two collaborated on the 2016 MTV comedy “Sweet/Vicious,” a college rape revenge comedy that predated “Promising Young Woman” by a few years. Despite overwhelmingly positive reviews, the show was cancelled by MTV after one season. It’s nice to see Robinson and Ballard get another shot at the vigilante genre in “Do Revenge,” though they’ve traded violence for more psychological tortures.

Visually, the movie looks like a TV show, as so many mid-budget Netflix movies do. The garish school uniforms consist of sea foam green capes and purple berets, as if the kids of “Sex Education” got lost in Beverly Hills by way of Candyland. It also feels like a TV show compressed into two hours, though that’s not a bad tactic for captivating young viewers. Still, a little trimming wouldn’t have hurt, especially with each girl getting parallel romantic b-plots. The standout performances from Hawke and Mendes should draw their TV fans to try out a good old-fashioned movie for a change.

The soundtrack offers many delightful needle drops, and it’s no surprise to learn it was designed by Este Haim with Amanda Yamate. Musical easter eggs for the “Clueless” generation abound, with Mighty Mighty Bosstones and vintage Robyn throwbacks humming alongside hip contemporary fare like Olivia Rodrigo and MUNA.

If there’s a message in all the madness, it doesn’t exactly inspire hope for female solidarity. That may be a more realistic worldview that doesn’t see girls as being different than anyone else, though it’s certainly a cynical take on all of humanity. Still, the juicy teen drama of “Do Revenge” is a contemporary riff on an age-old classic. It’s nothing if not of the moment, and at the moment, teenagers are reading the same panic-inducing headlines as everyone else. If they want to do a little revenge on a world that seems hell bent on driving humanity off a cliff, “Do Revenge” offers some clever entertainment for the ride.

“Do Revenge” is now streaming on Netflix.

Sign Up: Stay on top of the latest breaking film and TV news! Sign up for our Email Newsletters here.